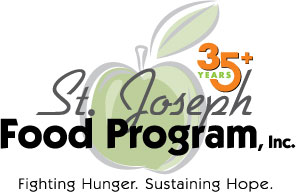 The St. Joseph Food Program is a non-profit, non-sectarian organization that has operated since 1982. Weekly we distribute 30 tons of fresh food and non-perishable items to hundreds of men, women and children – the elderly, working poor and temporarily unemployed. We are funded by cash and food donations from individuals, churches, businesses and foundations.

Our History - The Birth of the Food Program

One day in August of 1982, as I was heading towards Green Bay, I was about to start a rosary when I heard on the radio that a local company was going to lay off 400 people. I asked myself, “What I would do if it were me who would join the ranks of the unemployed?” I looked to my right into a garden where cucumbers were ripening, realizing that there would probably be a surplus of vegetables. All the way to Green Bay and back, my mind was working on a plan which, with proper nurturing, might have some positive effects.

When I returned home, I called Sherry Friemuth, head of the Social Concerns Committee at St. Joseph Parish in Appleton, and explained the thoughts that were on my mind. She was enthusiastic in her response, feeling that the excesses could be gathered and distributed through our church. She took the plan before the Social Concerns Committee and they too felt the idea had great merit, but were at a loss as to how to approach the problem of pickup and distribution. They referred the problem back to me. My first solution to the problem was to organize the retired people of the parish to pick up the excesses and bring them to the Rectory where they could be distributed to the needy.

I wrote a short article in the bulletin, “Vegetables, vegetables, calling for vegetables.” We asked individuals who wanted to donate vegetables to call the Friary, and we would have someone pick them up. This need to pick up never came about. Those donors came loaded with vegetables and filled the cooler to overflowing. In the process, we had no needy people alerted to the availability of vegetables. From the pulpit, we put the word out for anyone who needed vegetables to come. People of all descriptions came forward and depleted the supply, and a spark was ignited. As the word spread, the real needy came. There were only a few at first, then the lines grew, and the need for more supplies became a problem. We searched, and found stores that were throwing food out that could be salvaged. We would sort it out and keep what was worth keeping.

As we convinced store owners of the great need, one donation triggered another and the program grew in a strong, positive manner. Volunteers were drawn through the news media, and from the pulpit we were able to fill in with good people to help. Corporations noted the action and came forward with gifts of not only materials and food stuffs, but also large sums of cash to aid the needy.

And so the idea became a reality and the Food Program was born. 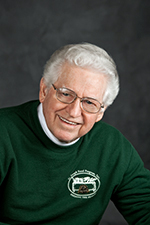 “The volunteers and staff have made St. Joe’s what it is today. For me it was the Lord guiding me to what he wanted done…So many have done so much! We must always remember that we could not function without the people who donate to this great program”

Consider these gifts: Your time, money, and food.

Help us stock our shelves!

Join the team of volunteers who make it all possible.

How You Can Help